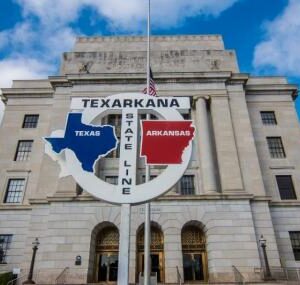 Located within the Texarkana metropolitan area, Mandeville is an unincorporated community in Miller County, Arkansas

Mandeville is the location of Old US 67, Mandeville, which is listed on the National Register of Historic Places, and described as being at AR 296, Miller County Road 138 and southeast of the current US 67

Texarkana is a city in the state of Arkansas and the county seat of Miller County, on the southwest border of the state. The city is located across the state line from its twin city of Texarkana, Texas

Miller County is a county located in the southwestern corner of the U.S. state of Arkansas. As of the 2010 census, the population was 43,462. The county seat is Texarkana.

This is actually the second Miller County

This original Miller County was abolished in 1838

During the Reconstruction era, it was organized again on December 22, 1874 from a portion of neighboring Lafayette County

Miller County is located in the southwest corner of Arkansas in the Piney Woods, a temperate coniferous forest that originally formed a logging and silviculture industry

Many of the fields have been cleared since to grow rice, soybeans, corn, and vegetables

Please Ask All Questions Before Buying

Seller Will Send Deed Out Via Priority Mail After Payment Clears

There are no reviews yet.